PDFTron for iOS includes Tools.framework, an open-source framework that implements virtually all of the SDK's UI functionality. Because the tools framework is open source, the PDFTron UI is customizable without restriction or limitation.

The tools framework itself is optional. Without it, the PTPDFViewCtrl will display a PDF with scrolling and zooming, but will not support text selection, interactive annotation handling, etc.

The tools source code is provided as part of the SDK and so it can be customized as required for your app, or simply referenced as sample code.

The PDF interaction tools implement the functionality that occurs when the user touches the PDF itself.

The interaction tools use a "manager" class, the aptly named PTToolManager, that serves as the PTPDFViewCtrltoolDelegate. It receives events, and passes the information to a set of tools that it mediates. Each of these tools is a class that implements the functionality for some particular purpose, such as text selection, form filling, ink drawing, and so on.

The control flow is illustrated below: 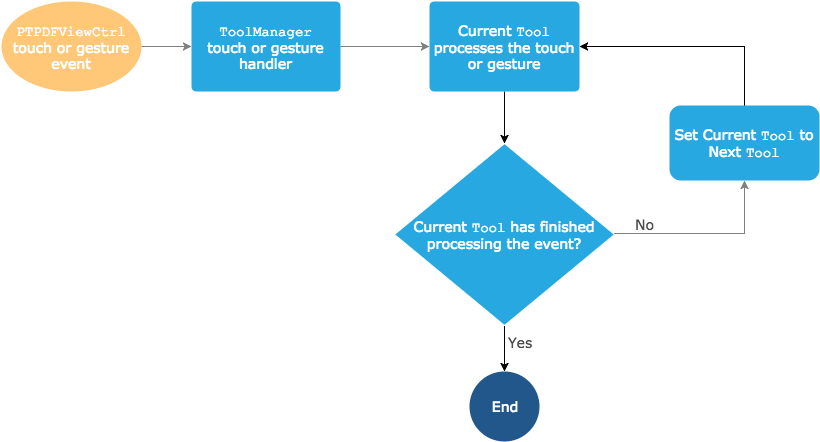 How events are handled by Tools.framework.

linkExample: Tapping on an annotation

As a concrete example, the steps outlined below illustrate how a tap on an annotation would be handled. We will assume that the user is not actively "doing something" on the PDF, so that PTToolManager's tool at the time of the tap is the general purpose PTPanTool.

While the above may initially seem long, it is following a fairly simple pattern: a tool implements specific responses to touch events, and tell the tool manager if they have fully handled the event or not. If so, that is the end of the event processing; if not, a new tool is created and the event is sent to it.

To understand the above flow in code terms, it is most useful to look at the "tool loop" (method runToolLoop:) in the PTToolManager. Here is the essence of the loop for a tap event:

For a further look on how interaction tools work, see the article about how to create a new tool.