WebViewer Server manages its own work queues and caches a lot of intermediate data opportunistically locally, both in RAM and on disk. As such, having access to more system resources will allow the Server to operate more responsively and efficiently (using cached data improves response time, and also conserves CPU resources).

If your use case calls for multiple backend nodes, then a smaller number of more capable nodes is a better choice than a large umber of smaller nodes -- a 4 core/8GB server will have a higher peak user capacity than two 2 core/4GB servers.

In order to maintain efficient operation, WebViewer server requires access to at least 2 CPU cores, at least 2GB of RAM, and 50GB of storage space. Anything less than 2 cores, and internal work queues will start to behave serially, which will drastically raise server response times.

Access to insufficient RAM limits the amount of data that can be held in the short-term cache, and it also limits the ability of the server to process particularly difficult documents.

If there is insufficient storage space, then the server will be unable to generate data without first pushing out existing cached data that is still in use by clients.

The hard disk which WebViewer Server does it's read/write operations on should also exceed at least 60 MB/s, without disk speeds reaching at least this level, there may be problems with operation of WebViewer Server under high load.

The WebViewer server comes with a self-signed certificate, usable for SSL debugging purposes only.

In order to use the SSL keys WebViewer Server must have them passed from the outside to the inside. We do this by mounting the key within the Docker container.

Once the key is prepared you should:

We also allow you to use the SSL built in directly to Tomcat. This is useful if you wish to use WebViewer Server without its load balancer.

In order to use these keys to the container we must pass them from the outside to the inside of the container. We do this by mounting the keys within the Docker container.

In order to use these certificates, we must pass them from outside the container to inside of it. We will mount a volume to do this:

The certificates in this directory will be directly imported into WebViewer Server's Java certificates on first run.

The container (along with webviewer) now has built-in support for using multiple backends behind a load balancer.

As the container is not entirely stateless, the balancer needs to fulfill a few requirements:

There is a sample configuration included in the download archive which demonstrates a fully working load balancer setup. Running docker-compose -f docker-compose_load_balance.yml up will launch a container composed of two WebViewer Server nodes with an HAProxy load balancer front end.

In the sample setup, incoming connections are directed to the least occupied backend node, and will remain attached to that node for the remainder of the session, or until the node starts to become overloaded.

If there are no available healthy nodes, then WebViewer will attempt to continue in client-only rendering mode.

In the WebViewer loadDocument call you are able to specify custom headers - these can contain things such as authorization tokens. When the WebViewer Server requests the URL specified in loadDocument, it will append these customHeaders.

WebViewer accepts signed links as an authorization method - the server will use these same links to successfully fetch files.

You may pass session cookies. This can be enabled as specified here, but only works when WebViewer Server and the file server in question share a domain.

In addition we have several options that allow users to better control the security of the WebViewer Server.

If you need to get around these cache limitations because of the nature of your file server, we provide several ways to do so.

linkUsing the on disk cache

The cache is controlled by two variables, TRN_MAX_CACHED_MB (MB) and TRN_MAX_CACHE_AGE_MINUTES (minutes). By default these values are both set to 0. In this default case the conditions for clearing data from the cache are as follows:

If the if either of the options or both are set, they would apply in order of precendence like so:

When we delete cache items, we start with the oldest first and will continue deleting items until the necessary conditions have been met or we hit this 30 minute item age limit.

A note on when the disk cleaner runs, its execution occurs at 5 minute intervals. What this means is that the disk you provide the server should be large enough for those 5 minutes of time between cleaner executions.

The first way to alter this behaviour is to use customHeaders which can be passed in your loadDocument code on WebViewer. All fields added to custom headers will be appended to the link when fetching the document, and not taken into consideration when creating the cache entry.

You may also choose to specify a cacheKey in the loadDocument call, when setting a cacheKey you are defining the name the item is cached against. This means, if you request a specific cacheKey, you will always recieve the cache for that specific cacheKey.

linkWebViewer Server interactions within a network 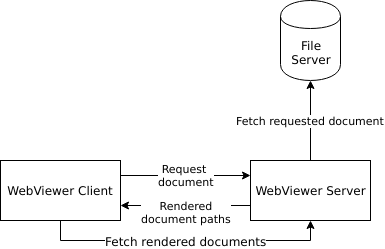 In addition, when WebViewer is working in conjunction with WebViewer Server, it will choose to use the fonts from the server instead of our publicly hosted fonts for WebViewer.

Outside of the file server and the WebViewer client, WebViewer Server has no interactions with other systems.

linkWebViewer Server in a distributed environment

A distributed environment constitutes something such as Kubernetes and the AWS Elastic Container Service. In these environments you may have more than one copy of the server running at once.

What this means is that HAProxy will be able to control where requests from WebViewer go based on a per document assigned query parameter. You do not need to enable any settings to use this feature. This feature was implemented for scenarios where the sharing of cross origin cookies does not work as intended. Such as communication over HTTP in Chrome version 80, where alterations to same-site cookie sharing has been created.

When this feature is enabled, it takes precedence over our normal cookie stickiness.

In a distributed environment WebViewer Server requires stability with connecting users. This is because the WebViewer Server container has a stateful cache. Whenever a user interacts with the server for a document conversation, they must continue communicating with the server they started the communication with until they request a new document. At this point, the user may be redirected to another server.

WebViewer Server achieves this in the AWS Auto-Scaling template with a HAProxy container that comes as part of the compose file. It manages user stickiness for each server, until their currently used server forces a reset of their stickiness cookie, which would occur when a new document is requested. The HAProxy configuration code here depicts how we handle the cookie settings. This can be found in haproxy/haproxy.cfg of our WebViewer Server package.

You may also run any sticky session solution you want with WebViewer Server, as long as it maintains a session with the server for the duration of the a document or client connection.

You likely require a health check for your distributed environment. We offer one on your running WebViewer Server at http://your-address/blackbox/HealthCheck. You can learn more about it in our usage section.