This document explains the tools hierarchy in PDFTron versions 6.8 and greater. 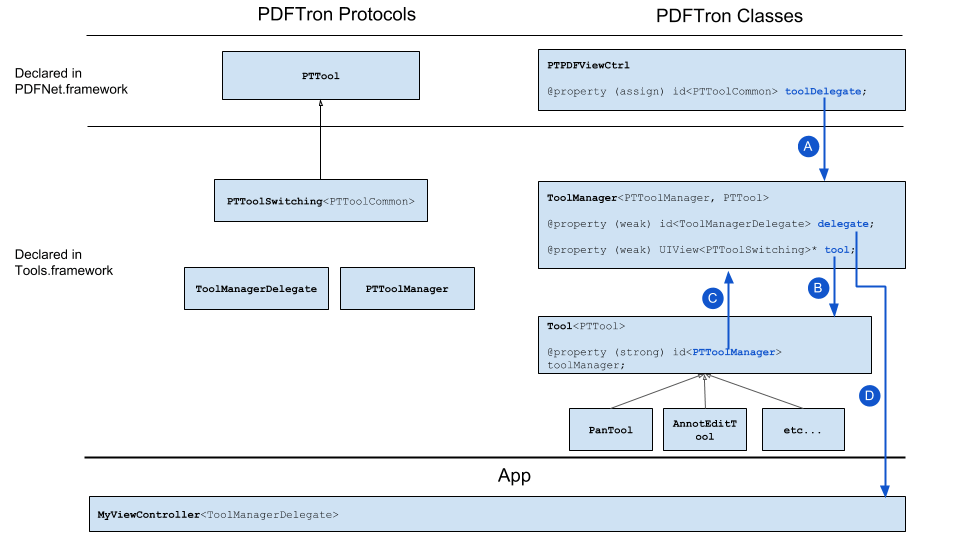 Events that occur on the PTPDFViewCtrl, such as touches began, moved, ended; tapped, long press; scrolled, etc. These are used to implement user interactive behaviour on the PDF.

The tools could have held a ToolManager instance, but this protocol distils what is actually required of it from a tool’s perspective. The events aren’t dealt with by the toolmanager directly, but are passed to the tool manager’s delegate.

Allows the app to be notified of events that occur due to actions of the tools framework (such as annotation added/modified, etc.), as well as modify default Tools.framework behaviour, for example if a link should be followed or not when tapped.

The control that displays a PDF.

An abstract base class that implements the Tools.framework default and shared functionality for the PTToolSwitching protocol.

These relationships are referring to those labled in the diagram at the top of the article.

An instance of a PTToolManager is set as the PTPDFViewCtrl’s toolDelegate so that it can pass on the event to the currently active tool (PTPanTool, PTAnnotEditTool, etc.).

The PTToolManager’s tool property is the tool instance that is currently active. It is the tool to which all events are sent.

A tool has a reference back to the PTToolManager instance so that it can report changes it has made to the document (such as annotation added/modified, etc.), and to check if default behaviour should be followed (such as following a link, etc). These events aren’t used by the PTToolManager itself, but are passed to the object set as the PTToolManager’s delegate.

The PTToolManager’s delegate property receives the events passed to the PTToolManager by the collection of tools (such as annotation added/modified, etc.).