There are a few ways to import or export annotations such as from a file, a database, or a document. There are also more advanced loading options to help with finer control of the data.

Another option is to use a database. You can choose to store the XFDF string for the document and user as described in using files, but with a database you can store and organize the XFDF data so that the XFDF string for each annotation is separate, allowing you to update it individually instead of updating the entire XFDF file for every change. For example, you can store and organize XFDF strings based on a combination of factors like document ID, annotation ID, author, etc.

For example, with a relational database, you can have a table called Annotations which contains annotation ID, document ID and xfdfString columns. In this setup, you can fetch all annotations for a particular document, or just fetch one annotation you are interested in. 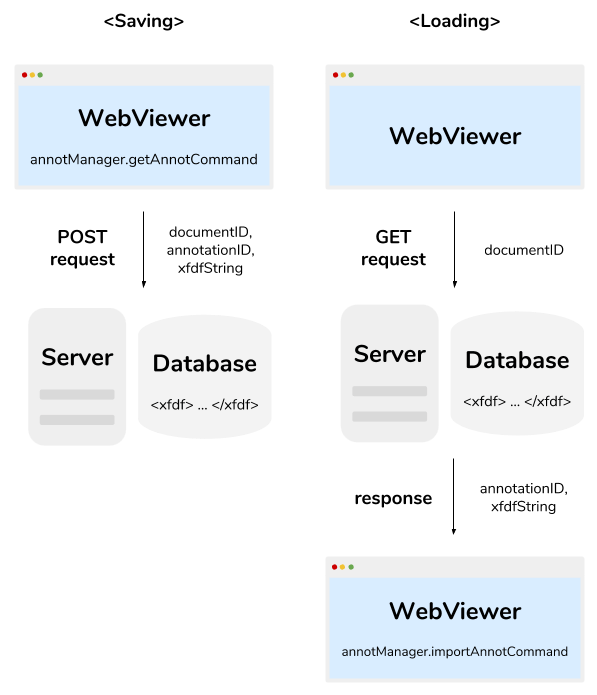 Annotations that have been added are inside the add element, modified annotations are in the modify element and deleted annotations have their id inside the delete element. If you call this function on the annotationChanged event, you can POST each command to your server to save each annotation change as it happens as opposed to having your user press a save button.

At this point you'll be saving annotations in realtime, so if you want to have a fully realtime solution you'll need to update annotations on each client in realtime. You can extend realtime saving further by hooking it up to a WebSocket, which can broadcast the new xfdfString in the database to be imported to all the clients. By utilizing getAnnotCommand instead of exportAnnotations you can greatly reduce the size of the data being transferred to/from the annotation server.

For samples about saving annotations into different databases, see links below:

←
Coordinates
Overview
→
Did you find this helpful?
Yes
No
Free Trial Support
close